I went to bed last night with the intention of springing from bed in the morning, striding confidently out into the world, to a new coffee place and writing a magnificent, funny, stirring essay for publishing today. Instead, I somehow fell asleep with my contacts in and so woke up especially early with my eyelids fused to my face, unable to find my slippers, and standing in the gray morning drizzle in skull and cross-boned pajamas and cowboy boots, holding an umbrella over my dog while she picked a spot to do her morning business. And then I went back to bed.

The remnants of my Protestant work ethic finally kicked in mid-morning and I managed to shower and dress myself and pack my writing bag and march, somewhat desultorily, to my car. And then I couldn’t find the new coffee place. Siri tired of saying ‘arrived at your destination’ after the third time I drove by the place where the map said the cafe was but it was not there. On the fourth drive by, I finally found it, tucked away around the corner and behind another row of storefronts. And they didn’t have poppy seed bagels. And all the good tables were taken. He was married a lot.

I’ve spent the past two hours, laptop perched on a too short table, trying to pound out 750 words on the subject of intelligence and love and dating and singleness and sexy and compatibility. I have started two essays, labored and sweated to about the 250 word mark and now, I got nothing.

This is not an uncommon event. It happens almost every time I set out trying to write one kind of essay on one subject. I do my best writing when I sit in front of my machine with no idea what is going to fall out of my head. My best is often a surprise to me.

Writing is difficult. It is a solitary labor, isolating and increasingly, non-remunerative. It is a skill everyone says they need or want, very few people actually possess, and yet, remains a beggar’s art. It doesn’t pay well because when done well, it appears effortless. A practiced writer does not let her reader see the sweat it took to produce each word. The words stand on their own, the technique fades into the background.

I’ve made a semi-hobby of acquiring writers’ biographies, memoirs, collected letters, etc. I don’t know which happens first, the melancholia or the writing. Are writers depressed and then they write to deal with the depression or do we try writing and the writing leads to breakdown? I don’t know but something is going on there. 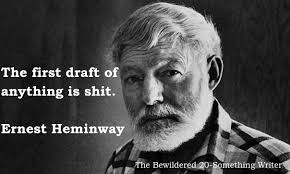 And sometimes, the second one and the third one, too.

I have the requisite unhappy childhood and Gothic dysfunction that seems required of all Southern writers. I have kudzu and moonshine and Holy Spirit-filled preachers. And I have all that misery which I have self-authored. I have plenty of spare time. Being unemployed helps with that.

All the elements are here. Everything is present. I finally feel well read enough and practiced enough to steal like an artist. It is all sitting there, waiting, just beneath the surface. All I have to do now is mine it.

I have to bring out into the light all those things I have spent so many years making sure were good and buried. I have to use the gifts I spent so much of my life ignoring. I have to remember things I wish I could forget.

Eventually, he blew his brains out.

I have to do all these things, without a map, without a guide, without even the barest hint of an idea where it will lead. People like me don’t do this kind of thing. I’m going to be exposed as a fake. I don’t even have the surety of a starting place. There is this place inside of me, every day, a tiny space, and in that space is written the word ‘begin’.